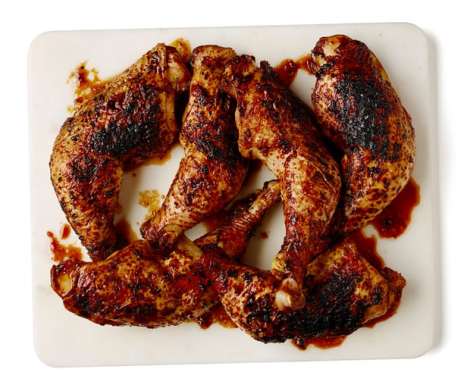 This is as an authentic a jerk as I have had…very spicy and simply YUM. It really is quick too, the fiddliest bit being crushing the allspice and pepper corns. But you must be very careful with the Scotch bonnets (available in Waitrose and other local grocer’s). We only marinated for an hour or so, being disorganised – imagine if it had the full monty! In fact we started the chicken in the oven fearing it would rain (it did), and meanwhile cooked asparagus, aubergine, sausages and some lamb cutlets (lots of hungry youth to feed).

Start at least seven hours before you want to eat, to give the marinade a chance to do its diabolical work. Blitz the allspice berries and peppercorns in a spice grinder (or pound to a powder in a mortar instead). Ideally, use whole berries, because they have a much better flavour than ready-ground allspice.

Coarsely chop the spring onions, using all but the very top of the green part as well as the white, and put in a food processor with the thyme leaves, cinnamon, nutmeg, ground allspice and pepper (you could also use a stick blender, or a large pestle and mortar).

Don your rubber gloves: it’s time to chop the chillies. If you’re foolhardy enough to chance it without, wash your hands well afterwards, because scotch bonnets mean business. If you want to temper the heat, remove the seeds, but don’t be tempted to substitute for another variety: their fruity flavour is key to the success of this dish.

Add the chopped chillies to the food processor (or whatever you’re using for this stage) and whizz to a thick puree. Add the sugar, salt, soy sauce (dark soy sauce is preferable if you can find it – it has a richer flavour and will give your chicken a lovely tan) and lime juice, and blend again to a fairly homogenous paste.

Put the chicken legs into a large bowl and pour over the marinade. Put your gloves back on (if you used them the first time, that is), then massage it into the meat, making sure you get it right under the skin – you’ll probably need to pull it away from the meat first to do this.

Cover the bowl and leave it to marinate in the fridge for at least six hours and up to 12. Take it out an hour before you want to cook, so it has time to come up to room temperature, or it will take much longer to cook.

Light the barbecue, and allow it to cool to a medium heat, so you can comfortably hold your hand over the grill for four seconds. If you’re having a big feast, sear steaks, fish or seafood on it while you’re waiting, or do some asparagus spears, sliced courgette or lettuce halves for an accompanying salad. Anything that will cook before it burns, basically.

Once the barbecue feels as if it’s reached the right temperature, cook the chicken until well coloured on both sides, then move it as far to the side of the grill as you can, away from the coals. Clap on the lid (if you don’t have a lid, improvise with a roasting tin, large terracotta flowerpot or frying pan) and leave to cook for about 25 minutes, turning occasionally, until it’s done.

Alternatively, put the chicken in a roasting tray, cover with foil and bake at 200C/390F/gas 6 for about an hour, until cooked through, then finish in a very hot griddle pan until charred and crisp. 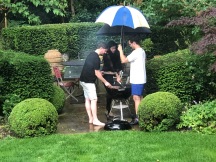 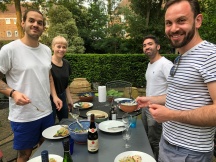 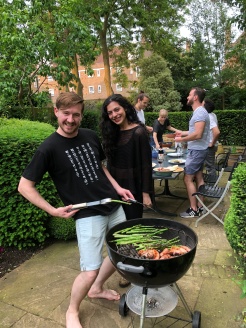 The joys of an English BBQ!