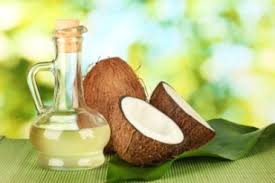 I can see you all rolling your eyes and thinking this is just another crackpot health claim. I thought so too until I read the book, Coconut Cures by Brice Fife, that a kind dinner guest gave me recently. Now I have substituted coconut oil for all others in my cooking (and changed all the recipes on this site accordingly!), am adding 2 tsp to my daily granola and fruit, and dressing my lunchtime salad with it (plus balsamic and lime). Soon I daresay I shall be rubbing it in to my scalp where I have pre-cancerous sun damage which freezing has failed to cure and using it as sun tan oil instead of Nivea or Ambre Solaire.

Yes, dear reader, I am a convert!

So let’s re-wind a little. Traditional societies all the way from South America, Africa, India, Sri Lanka and to as far away as the South Pacific have traditionally used coconut for both food and medicine. In India the coconut palm is called ‘the tree which provides all the necessities of life’ and in the Philippines it is similarly called ‘the Tree of Life.

I don’t want to get all medical and involved in citing medical research here (it’s all in the book – here I merely offer a précis of some of the more salient evidence) but I remain convinced by some simple facts: that in the South Pacific and Papua New Guinea and other island populations where coconut forms the core diet, and BEFORE western influences took over, there was almost no heart disease, blood pressure or diabetes.

In traditional medicine, including Ayurveda where coconut plays a pivotal role, coconut is used internally and externally – rubbed into wounds, burns, swollen joints, aching muscles, cuts and bruises; drunk as a health tonic; valued for its antimicrobial properties; used to promote hair growth and protect the skin; ingested to expel parasites such as tapeworms.

Why has the magic coconut remained such a secret?
Many people think that coconut is an artery-clogging saturated fat that leads to high cholesterol. This opinion has been bandied about by the soya-bean industry in their multi billion-dollar campaigns to promote their own hydrogenated fats and oils.

The basic facts are opposite. Far from clogging up your arteries, coconut (in its basic state of MCTs – Medium Chain Triglycerides), unlike all the other commonly used fats (e.g. canola, soy, corn and even olive oils) is predominantly composed of Medium Chain Fatty Acids (MCFAs) as opposed to Long Chain Fatty Acids (LFCAs) and the MCFAs have a completely different effect on the body to LCFAs.

They are easily digested and help the body to assimilate minerals, vitamins and some amino acids. Because MCFAs are used by the liver as a source of fuel to produce energy, eating coconut will also give you extra energy. 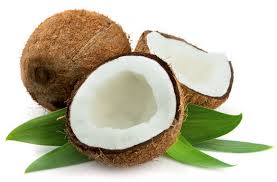 Here are some of the other benefits of coconut

Constipation & fibre
Coconut meat is the most concentrated source of dietary fibre, coming in at 71% compared with the more famous bran’s percentage of 42%. And, unlike bran, it actually tastes good too! High fibre diets are crucial in helping prevent constipation and, in more severe cases, can help prevent the development of colon cancer, something that was unknown in traditional high fibre-eating societies in Africa, as evidenced by Dr Burkitt’s pioneering research in the 20th century (my parents knew him in East Africa!).

Diarrhea and IBS
Coconut fibre – eaten as coconut meat – also feeds friendly bacteria in the gut, which produce vitamins and other substances that promote health and wellness. The important point here is that the fibre in coconut feeds friendly bacteria in our gut, essential for good health At the same this keeps harmful bacteria such as candida under control. This is important because friendly bacteria produce SCFAs (Short Chain Fatty Acids) which have the ability to kill disease-causing micro-organisms. Abnormally low levels of SFCAs can lead to nutritional deficiencies and can cause internal bleeding other other colon problems. Therefore the more fibre we eat, the more friendly bacteria will thrive and produce SCFAS, which in turn keep our guts healthy.

Anecdotal evidence has shown that a number of people have controlled their IBS and chronic diarrhea though the simple eating of a couple of macaroons a day.  Better still to eat fresh raw coconut and avoid all the other sugars and transfats in the biscuits!

As for me, I shall take the oil with me, as well as my charcoal tablets, on my forthcoming trip to China – just in case!

Weight management
Coconut oil is the world’s only natural low calorie fat; but more than that it satisfies hunger better than any other fat or food, and as a result we snack less in between meals. It also raises the metabolism, resulting in the burning of more calories (due to the ease with which it is absorbed compared to other fats), with fewer being converted to body fat. Conversely if you are skinny, it seems not raise the metabolism (it seems to be rather clever!) and indeed, because it nourishes the cells, it helps you maintain a healthy weight.

Thyroid
This kick-starting of the metabolism can have a useful effect on people suffering from low thyroid, which is essentially a by product of the metabolism being stuck in low gear, often combined with a poor diet. The energy that coconut gives you raises your metabolic rate and as a result helps with low thyroid problems.

Infectious illnesses
Ingesting coconut oil in its raw form of MCTs (Medium Chain Triglycerides) transforms them into MCFAs, which in turn posses powerful antimicrobial properties capable of destroying disease-causing viruses, bacteria, fungi and parasites. This should be no surprise as MCTs are the primary ingredient in human breast milk and protect new-born babies for the first few months of their lives. Taking coconut oil can help with common illnesses such as Candida, IBS, gingivitis, sinus, giardia, herpes, flu, conjunctivitis and food poisoning, among many others.

And now we get to the interesting bit: anti-oxidants and cancer. We all know that anti-oxidants are effective in protecting us from the cancer-causing free radicals. As a proven anti-oxidant, coconut oil has the opposite effect to polyunsaturated fats, which generate large numbers of free radicals that attack our cells and are contributory factors in causing cancer. They are also thought to be a major factor in macular degeneration and liver spots in the skin. So keep taking that coconut oil to make you look and feel younger and protect your eyesight.

As for cancer, coconut oil has been used in traditional medicine for centuries to rub into skin lesions; I read with interest of some experiments on rats with chemically induced soft tissue sarcomas, which were given a mixture of coconut and fish oil, and the tumour growth was inhibited. I will keep you posted!

Boosting immunity
Research has shown that MCFAs not only kill many disease-causing microorganisms, but also indicates that they can boost the immune system. Of course you need to follow the mantra of having a healthy diet, exercising regularly, low stress, lots of sleep, fresh air and sunlight. Combine this with the coconut oil and a positive mental attitude and you will have a fully functioning immune system!

So what does all this add up to?
For me it’s a no-brainer. Coconut is a totally natural product, which can be taken at no risk. It has lower calories that other oils, and a different chemical make-up which, rather than clogging up arteries, causing cholesterol and heart disease, can in fact have beneficial effects to health and well being. It may even help to prevent some cancers, heart disease – and make my skin and hair shine and glow in new ways!

The suggested daily dose is as follows:

Where can I buy coconut oil?
You can buy it in oriental grocers or in health food shops. Whichever you choose, its important to only get the raw, virgin variety, which is made without adding chemicals or exposing the meat to high temperatures, rather than the other kind RBD (Refined, Bleached Deodorised) which is made from copra, heated up with all those nasty processes included. As a result it tastes pretty horrid and smells worse! A good oil will be pleasant to smell and cook with and you soon get used to it, especially if you cook a lot of Asia Pacific food like me!

In colder climates the oil will be white and solid, in hot ones it will melt into liquid. You can use it either way (easier to pour onto a salad if liquid). The author of Coconut Cures recommends adding your daily dose to herbal teas and smoothies, and gives a number of recipes to try.

Risks
The biggest risk is of a coconut falling on your head. Which can of course be fatal!

There you have it, in a nutshell, so to speak…

7 responses to “Coconut crazy – the #healing powers of #coconut”