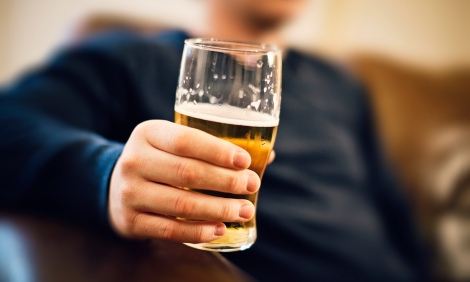 The New Year really is a time for hair shirts all round. But this latest research again endorses my new lifestyle changes  and advises limiting drinking to 3-4 days week, leaving the rest alcohol free.  The easiest way to do this, we find, is not to drink when at home, and only to indulge when we go out and are being social. We do make exceptions for when we are holiday! Read the rest here – and note that men and women now have the same guidelines (I wonder if that is because women have got heavier on average with the onset of obesity and bad eating habits?).

Men have been advised to drink no more than seven pints of beer a week – the same as the maximum limit for women – in the first new drinking guidelines to be released by the UK’s chief medical officers for 20 years.

They also advise there is no safe level of drinking for either sex, and issued a stark warning that any amount of alcohol consumption increases the risk of developing a range of cancers, particularly breast cancer.

Dame Sally Davies, the chief medical officer for England, said: “Drinking any level of alcohol regularly carries a health risk for anyone, but if men and women limit their intake to no more than 14 units a week it keeps the risk of illness like cancer and liver disease low.”

The new 14-unit recommended maximum is equivalent to a little more than nine small 125ml glasses of wine, 14 single measures of spirits or seven pints of lager or beer. For women the limit is unchanged, but for men it drops from 21 units.

The UK’s recommended limit for men is now one of the lowest among countries that issue guidance for an appropriate intake of beer, wine and spirits and makes it one of only a handful of countries to issue identical advice for both sexes.

The 14-unit figure is based at a level expected to cause an overall lifetime risk of death due to alcohol of approximately 1%, according to the independent advisory group which formulated it. However, it cautioned that “there is little evidence regarding the impact of any guidelines in changing health behaviours”.

Prof Sir David Spiegelhalter, Winton Professor of the Public Understanding of Risk, University of Cambridge, said: “These guidelines define ‘low-risk’ drinking as giving you less than a 1% chance of dying from an alcohol-related condition. So should we feel OK about risks of this level?

“An hour of TV watching a day, or a bacon sandwich a couple of times a week, is more dangerous to your long-term health. In contrast, an average driver faces much less than this lifetime risk from a car accident. It all seems to come down to what pleasure you get from moderate drinking.”

The alcohol industry lobby group cautioned that the UK was “breaking with established international precedent by recommending the same guidelines for men and women”. The rationale for having a lower limit for women than men has been based on women weighing less than men on average and having less water in their bodies, pound for pound.

The latest Health Survey for England says that 85% of women and 68% of men drank 14 units or fewer a week in 2014, including those who did not drink at all. By comparison, 78% of men drank 21 units a week or fewer.

Dr John Holmes, senior research fellow from the Sheffield AlcoholResearch Group, said having the same guidelines “reflects that there are only very minor differences in alcohol-related health risk between the sexes at this level of consumption”.

The Department of Health is consulting on whether there should be a guideline for the maximum number of units to be drunk in a single session/day.

The guidance also recommends avoiding binge-drinking by spreading the 14 units over three or more days (to avoid drunken injuries as well as long-term illness) and says everyone should have “several” alcohol free days a week.

Pregnant woman are also told they would be best off avoiding alcohol together, clearing up a previous anomaly whereby – in England, Wales and Northern Ireland – pregnant women were advised to avoid alcohol but, at the same time, told that, if they did drink, they should consume no more than one to two units, once or twice a week.

The guidance was published on the same day as the latest findings by the Committee on Carcinogenicity, which state that the risk of cancer increases with the more alcohol a person drinks. Even an intake of fewer than 10.5 units a week (or 1.5 a day) gives an increased risk of cancer of the mouth, throat and gullet and – in women – breast cancer.

The changes are based on evidence, unavailable in 1995 when the previous guidance was published, which also suggests the protective effect of alcoholagainst conditions such as ischaemic heart disease is weaker than previously believed.

Separately, an independent review of evidence, which formed the basis for the new advice, found that the benefits of alcohol for heart health only apply for women aged 55 and over and the greatest benefits is seen when they limit their intake to around five units a week, equivalent to around two standard glasses of wine.

Professor Sir Ian Gilmore, chair of the Alcohol Health Alliance, which represents over 40 organisations with an interest in reducing the harm caused by alcohol, said: “People have a right to know the risks associated with drinking alcohol. Only with accurate and transparent information are people able to make an informed choice about how much alcohol they consume.”

Dr James Nicholls, Alcohol Research UK’s director of research and policy development, said women who have drunk small amounts during pregnancy, perhaps unknowingly, should not worry excessively. He added that the 14 unit limit may seem low but was “an important reminder that all alcohol consumption comes with some degree of risk”.