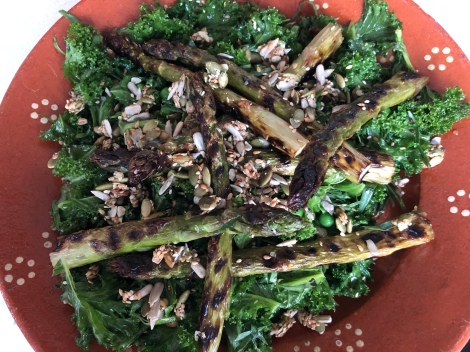 There’s nothing like a week of momos (Tibetan dumplings), rice and dal to whet the appetite for good old English asparagus and kale.

There’s a little bit of massaging and marinating involved here, but you can do that well ahead of time, if need be. Just don’t mix everything together until the last minute. I didn’t have dill, maple syrup or edamame so substituted as noted

Heat the oven to 160C/320F/gas 2½. Mix both seeds with half a teaspoon of maple syrup, an eighth of a teaspoon of salt and a good grind of pepper, then spread out on a small oven tray lined with baking paper. Cook in the oven for 12 minutes, until the seeds are golden brown, then set aside for about 20 minutes, during which time they will clump together and crisp up as they cool. Once cool, break the candied seeds into 2-3cm pieces.

Put the kale in a large bowl with the remaining teaspoon of maple syrup, two tablespoons of oil, the vinegar, mustard and a quarter-teaspoon of salt. Using your hands, mix together and massage the kale for about a minute, until it softens and takes on the flavours of the marinade, then set aside for at least half an hour (or up to four hours, if you want to get ahead).

Warm a tablespoon of oil in a large frying pan or griddle pan on a medium-high heat and, when hot, add the asparagus and an eighth of a teaspoon of salt, and fry for six minutes, turning regularly so it starts to brown and soften. Leave to cool, then cut on an angle into 4cm-long pieces.

To serve, toss the edamame and herbs into the kale, then spread out on a large platter. Top with the asparagus and candied seeds, and serve at once.